The vehicles began streaming in on Friday morning and by late afternoon almost 600 people had arrived at the Cypress Hills Interprovincial Park for the 2001 Uranium City Reunion.
Almost 20 years had passed since Eldorado Nuclear announced the closure of its Beaverlodge Mine, which led to Uranium City losing over 80 percent of it’s population in just six months. But this last summer, ex-residents drove or flew in from the Northwest Territories, British Columbia, Alberta, Saskatchewan, and, in my own case, Montreal, Quebec.

The town they came to remember sits on the opposite end of the province, just 40 km south of the NWT border and divided from the rest of Saskatchewan by Lake Athabasca. Just 200 people now call Uranium City home. And, beyond the barely occupied downtown core, empty houses, schools, and public buildings stretch over three or four kilometers of some of the most exquisite country in the Canadian Shield.

In the 1950’s, Uranium City was a boomtown, fuelling the British and American nuclear weapons programs. Later, it fuelled the Candu reactor, which was supposed to put Canada at the forefront of the nuclear industry. By the late 1970’s, it was to be a model northern town. Candu High, built in 1978, was the best-equipped high school in the North, and Eldorado Nuclear spent $100 million on new roads, cedar-panelled houses, bunkhouses, offices and improvements to the mine. Declining ore prices and an inexplicable change of policy put an end to that.

And yet, both town and reunion area testament to a community that survived – aided, curiously enough, by the internet – two decades after being deserted by the very industry which gave it life.

“The veteran prospector came – heavy-bearded, with face burned brown by a thousand suns, roughened by sand and wind. The novice came – protégé of God alone. The drifter came – forsaken of both God and man, searching for a new beginning. All of them were lured by the golden promise of an awakening North.”

Uranium was discovered near Beaverlodge Lake in the late 1940’s, and Eldorado Nuclear, which supplied ore from Port Radium, NWT to the Manhattan Project, sank three mineheads which in turn set off a staking rush. Thirty-three mines – some no more than a hole in the ground, some large enough to require bunkhouses, stores and even townsites of their own – set up in the area.

Uranium City grew apace. The first store was a tent set up by Gus ‘the Famous’ Hawker, an English immigrant who made headlines back home when he chartered a plane and flew to London with his six daughters to see Queen Elizabeth’s coronation. Tents and shacks sprung up around downtown, then a hotel, bars, cafes and a movie theatre. Main street was as busy at night as it was in the day; the flood of men and money outdid the Klondike rush of the century before.

In 1959, Prince Phillip paid a visit. Then, that same year, both the British and American governments cancelled their contracts for Canadian uranium. Every mine but Eldorado shut its doors.

Soon, the town’s fortunes rose again when the Canadian government began stockpiling uranium for the Candu. Uranium City’s population grew. Locals were encouraged to invest in businesses and miners and their families were imported from as far away as the Phillipines and Germany to fill the new housing complexes around town.

Then, on Dec. 3rd, 1981, came the announcement that Beaverlodge Mine was closing. Protests were made, petitions circulated, meetings held, all to no avail. When the winter road opened across Lake Athabasca in February, moving vans rolled in from southern Saskatoon and Edmonton and for a few weeks the ice road as busy as the Trans-Canada highway.
My family lived twice in Uranium City, first in the 60’s, then the late 70’s before we moved to Vancouver in 1980. When we left for the last time, I was 15 and yet I neve forgot Uranium City or the North. 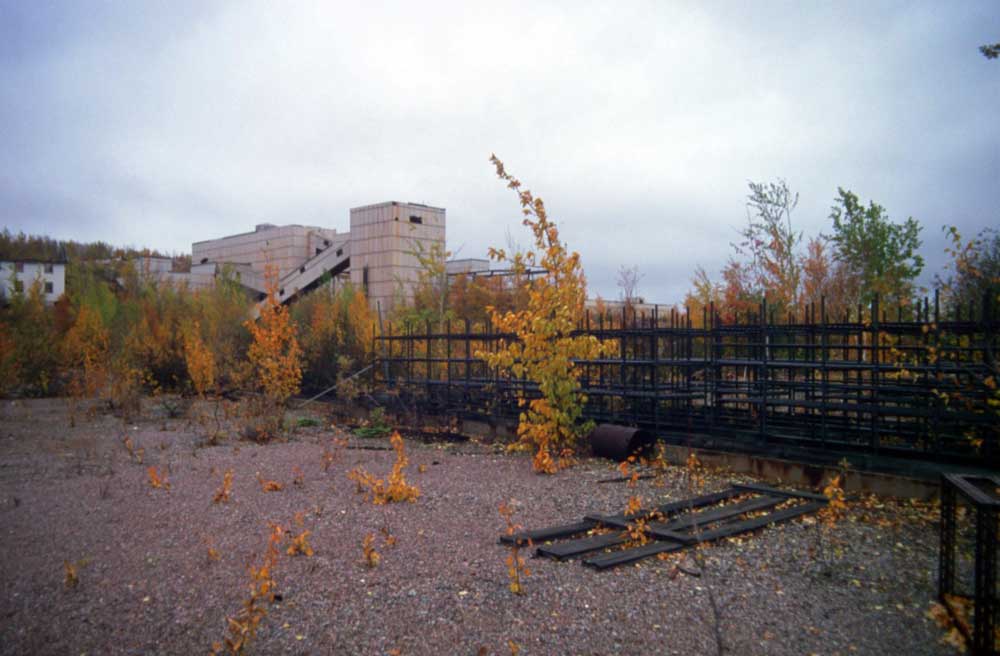 In the 60’s, there remained an echo of the frontier, and bush pilots, prospectors, and trappers were as much a part of town life as the miners and retailers who made up the bulk of the population. By the mid-70’s, Uranium City was coming into its own as a stable community, and yet, accessible only by air and the winter road, it was still very much the frontier. Summers and winters were spent outdoors, and stepping into the country, one felt hundreds of miles of uninhabited territory out beyond the town; at night the Northern Lights crackled overhead.
In 1996, I went back after an absence of 16 years. The first days were difficult: much of the town looked as if it had been ransacked by an invading army, then abandoned; roofs and walls had been removed, doors swung loosely on their hinges, and every window was smashed. Our old house had been stripped to bare wood and graffiti covered the walls. Candu High was little more than a concrete shell, dark and cold at its core, with refuse strewn across the floors.
I returned in 1987 and 2000, partly to research a novel I wanted to write about the town, partly out of curiosity. The population is mostly native, a change from the old days when the population was mostly white. The people who stayed did so for the same reasons that people have always stayed in the North – a love of the land or a disinclination, for whatever reason, to live in the south.

James and Luffy Augier were born in Camsell Portage – a Metis community 100km to the west – some 60 years ago and lived in Goldfields and Gunnar Mines townsite (where James began work in the mine at age 14) before moving to Uranium City in the 60’s. James started his own construction business: by the time the mine closed, he was a millionaire. Now, James guides in the summer and hunts in winter, remains active in Metis politics, and lobbies the government to clean up the town. Though five of his six children have moved south, James and Luffy plan to stay as long as they can.

Danny Murphy moved here in the 1970’s with his wife Pat. They took a lot outside of town and lived in a canvas tent while they built their first cabin from logs and timber from the abandoned mines. Four cabins decorate their wooded lot, ornamented with license plates, moose and caribou antlers, cast-iron stoves and other memorabilia. Danny doesn’t miss the south:

“The government wants us all to clear out but we ain’t going. We like the country up here.”
Andy and Clarice Schultz plan to move here in a couple of years when Andy, at age 43, retires from his job in Alberta. Andy was born and raised in Uranium City but left upon graduation in the 70’s. He came back 20 years later and decided that Uranium City was where he wanted to be. A few years later, he met Clarice and they took over his old family home and a cabin on a nearby lake.

Last year they crossed Lake Athabasca five times by skidoo, bringing up supplies and getting ready for the permanent move.

In 1952, Jim Price went down in a white-out over Lake Athabasca and walked for 24 hours across the lake to get help for his three passengers. He got help, but lost both his feet. Now, at 71, he lives near the seaplane base and flies for his own pleasure.

Although Uranium City has experienced far more than its share of pain and darkness, these people and others provide an echo of the old frontier spirit. This is a town, after all, where the post office is run out of the local jail, where people think nothing of traveling hundreds of miles by boat or skidoo, where a Canada Day Parade is still held on Main Street, where kids play hockey in the deserted Legion.

Len Kilbreath began the ‘Friends of Uranium City’ website in 1996, for the purpose of promoting the 1997 reunion, which was the first to be held in Cypress Hills. There’d been other reunions, which drew a couple of hundred people, as well as an annual New Year’s Dance in Saskatoon which always had a good crowd – but Len and his wife Joyce put on the first large scale reunion near their home in Vernon, BC in 1992, drawing 400 people.

“It was like stepping back in time, seeing people who’d shared their whole life together and really built the town.”

Encouraged by this success, they held the first Cypress Hills reunion in 1998, which brought in 700, most of whom hadn’t seen each other since the mid-80’s. Len spruced up his website, adding photos, articles, and an address list which quickly grew to over 1000 names. For the first time since the mine closed, people began to find their way back to each other. The years after the closure left much anger, shame, and bitterness in their wake, and in a way the Internet provided the perfect medium for people to make contact with the town – and each other – because of its relatively casual nature.

It was through this website that I discovered a dozen old friends, some I see regularly, some I just keep up with through the odd email or phone call.

The 2001 reunion lasted three days. Most of the 600 people were in their 50’s or 60’s, their faces etched by the cold or long hours in the mines, slightly out of place in the resort setting. There were plenty of children as well as 50 or so of my ex-classmates from Candu High, now in their mid-30’s, married with kids of their own.

To many, Uranium City had been the only place they’d known when the mine shut down. The subsequent years when their friends and neighbors left and the houses were abandoned had left a wound that will never totally heal. And yet they retained their easy closeness, and the habit of finding absurdity and humor in any given situation: traits that had made living in Uranium City so memorable.

Now, Uranium City struggles year by year. The hospital is set to move in the spring of 2003 and most resident feel that when the hospital goes, the government will cut basic services. But deadlines for the move have come and gone before and there are hopes that the hospital might stay a little longer, just as there are hopes that the price of gold might rise and the gold mine at Goldfields might open again, or that a ‘rare earth’ showing 30 km out of town might clean up the tailings ponds left by the Gunnar and Lorado mines, or that the town site itself will be cleaned up, or that the fishing lodges and spectacular countryside will bring in enough tourism to keep the town going.

As long as there are people in Uranium City, there is hope that one day the town might blossom once more.

11 thoughts on “Going Back Home to Uranium City”